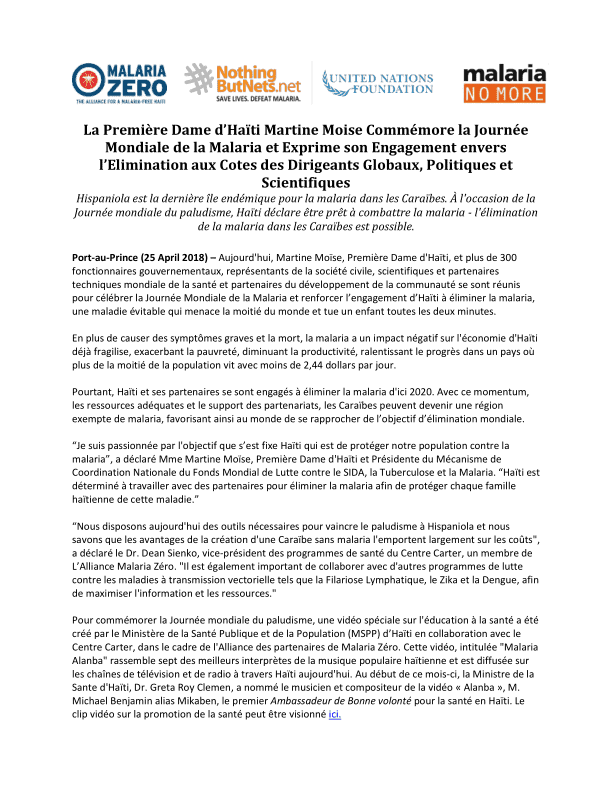 Port au Prince (April 25, 2018) – Today, the First Lady of Haiti Martine Moise and more than 300 government officials, civil society representatives, scientists and technical partners of the global health and development community gathered to celebrate World Malaria Day and increase awareness of Haiti’s commitment to eliminating malaria, a preventable yet deadly disease that threatens half the world’s population and kills a child every two minutes.

In addition to causing severe illness and death, malaria has a negative impact on Haiti’s already fragile economy, exacerbating poverty, decreasing productivity, slowing progress in a country where more than half of the population already lives on less than U.S. $2.44 per day.

Yet, Haiti and its partners are committed to eliminating malaria by 2020. With the right resources, partnerships and momentum, the Caribbean can be a malaria-free region, thus bringing the world one step closer to global elimination.

“I am passionate about Haiti’s goal to keep our people safe from malaria,” said Martine Moise, First Lady of Haiti and Chair of Global Fund to Fight AIDS, Tuberculosis and Malaria’s Country Coordinating Mechanism. “Haiti is committed to working together with partners to eliminate malaria to protect every Haitian family from this disease.”

“We have the tools today to beat malaria in Hispaniola and know that the benefits of creating a malaria-free Caribbean far outweigh the costs,” said Dr. Dean Sienko, vice president of health programs for The Carter Center, a member of the Malaria Zero Alliance. “It is also important to work together with other vector-borne disease programs such as lymphatic filariasis, zika, and dengue, to maximize information and resources.”

To commemorate World Malaria Day, a special malaria health education video was created by the Haitian Ministry of Public Health and Population (MSPP) together with The Carter Center, as part of the Malaria Zero Alliance of partners. This video, titled “Malaria Alanba” (Malaria Go Down) brings together seven of the top performers in Haitian popular music and airs on television and radio stations across Haiti today. Earlier this month, Haiti’s MSPP Minister Dr. Greta Roy Clemen appointed musician and “Alanba” contributor Mr. Michael Benjamin, aka Mikaben, to be the country’s first Goodwill Ambassador for Health. The health promotion music video can be viewed here.

Hispaniola, which includes Haiti and the Dominican Republic, is the only remaining island in the Caribbean where malaria is still endemic. According to the Pan American Health Organization (PAHO/WHO), Latin America and the Caribbean have made significant progress in curbing the burden of malaria since 2000. Currently 20 of the 21 malaria endemic countries in the region have committed to end this disease for good. Today, 109 million people in the Americas are still at risk of contracting the disease, and approximately 7 million are at a high risk.

“Elimination in Hispaniola is within reach,” said Margaret Reilly McDonnell, Executive Director of the United Nations Foundation’s Nothing But Nets campaign. “Increased focus and funding on global elimination is critical, and we applaud the efforts of the country of Haiti toward ensuring that no one dies from a mosquito bite.”

Bi-national cooperation is crucial to achieve island-wide malaria elimination. Last year, a binational project to eliminate malaria in Hispaniola, spanning border communities of Ouanaminthe (Haiti) and Dajabon (DR) received the Malaria Champion of the Americas award by PAHO/WHO for its “outstanding achievements” and creative response using innovative technologies that involve the private sector and community and traditional health workers to improve surveillance, diagnosis and treatment of malaria in both countries.

“Haiti’s progress toward malaria elimination demonstrates its commitment to saving lives,” said Josh Blumenfeld, Managing Director for Global Policy and Advocacy, Malaria No More. “Eliminating malaria from Haiti would be an enormous victory, freeing the country from the burden of this disease, and accelerating elimination in the Americas. On this World Malaria Day, we are inspired by Haiti’s leadership and the collaborative efforts from all partners working to rid Haiti of malaria.”

Building upon the binational project success, the Malaria Zero Alliance, led by the MSPP’s Programmes Nationaux de Malaria et de Filariose Lymphatique (PNCM) in Haiti, is focusing efforts in Grand’Anse. Malaria Zero has prioritized Grand’Anse due to its disproportionate burden of malaria transmission, accounting for more than 50% of malaria cases nationwide. Activities to ensure all cases of malaria are tested, tracked and treated are now underway in five initial communities (Les Irois, Anse d’Hainault, Dame Marie, Chambellan, and Moron) and anticipated to expand to the entire department in 2019.

“Haiti’s leadership in the battle against malaria has moved the elimination effort to a critical point where the path is clear for achieving a historic milestone in the Americas region — a malaria-free Haiti and Caribbean,” said Dr. Michelle Chang, Director of Malaria Zero, and CDC Medical Epidemiologist. “Country leadership, coupled with strong partner commitment and innovative strategies, has resulted in the ability to pinpoint the exact locations of malarial infections, rapidly cure them and stop onward transmission. These novel approaches could be used elsewhere in the global fight against malaria.”

Great strides have been made toward malaria elimination; success in Grand’Anse will significantly reduce the overall malaria burden in Haiti and lessons learned will serve as a guide for Haiti to reach its goal of a malaria free Haiti by 2020.

“Haiti is ready to reach zero deaths and no more local transmission by 2020. Between 2010 and 2017, reported cases of malaria at the national level decreased from 84,153 cases to 18,983 cases,” said Dr. Jean Frantz Lemoine, PNCM’s Coordinator. “Malaria testing in the population has increased steadily since 2015 due to Rapid Diagnostic Tests and community-based care — more than tripling community case detection between 2016 and 2017. This proves Haiti can end malaria for good in the coming years.”

More partnerships and resources are required to end malaria for good. For more information about malaria elimination efforts in Haiti, visit http://www.malariazeroalliance.org.

About Nothing But Nets

Nothing But Nets is the world’s largest grassroots campaign to save lives by preventing malaria, a disease which claims the life of a child every two minutes. Inspired by sports columnist Rick Reilly, hundreds of thousands of people have joined the campaign that was created by the United Nations Foundation in 2006. Nothing But Nets has raised over $65 million to help deliver 12 million bed nets to families in need, along with other crucial malaria interventions. In addition to raising funds for its UN partners, Nothing But Nets raises awareness and voices to advocate for critical malaria funding for the U.S. President’s Malaria Initiative and The Global Fund to Fight AIDS, Tuberculosis and Malaria. It only costs $10 to help save lives from this deadly disease. Visit www.NothingButNets.net to defeat malaria.

About the United Nations Foundation

The United Nations Foundation builds public-private partnerships to address the world’s most pressing problems, and broadens support for the United Nations through advocacy and public outreach. Through innovative campaigns and initiatives, the Foundation connects people, ideas, and resources to help the UN solve global problems. The Foundation was created in 1998 as a U.S. public charity by entrepreneur and philanthropist Ted Turner and now is supported by global corporations, foundations, governments, and individuals. For more information, visit www.unfoundation.org

About Malaria No More

Malaria No More envisions a world where no one dies from a mosquito bite. More than a decade into our mission, our work has contributed to historic progress toward this goal. Now, we’re mobilizing the political commitment, funding, and innovation required to achieve what would be one of the greatest humanitarian accomplishments – ending malaria within our generation. For more information, visit www.malarianomore.org

Malaria Zero is an alliance of partners with one bold goal: to accelerate elimination of malaria from the island of Hispaniola. Malaria Zero partners are implementing innovative, evidence-based strategies, including identifying and fine-scale mapping of areas of high transmission and risk, and piloting novel, targeted approaches to elimination. Malaria Zero was made possible by a $29.9 million grant from the Bill & Melinda Gates Foundation, but at least twice as much more is still needed to ensure that our team of technical experts is able to implement island-wide strategies to achieve malaria elimination. For more information, visit http://www.malariazeroalliance.org 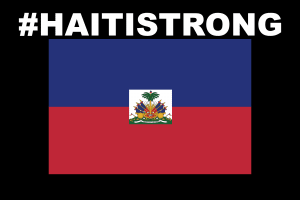 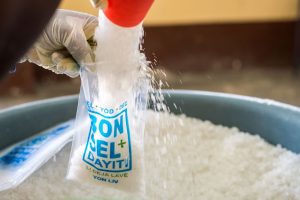